I was pondering the other day that we don't do much "hands-on" stuff in our culture anymore. America was built by farmers clearing trees, by cowboys herding cattle, by pioneers building wagons and moving west, people having the vision to build skyscrapers and automobiles, Texans drilling for oil, etc. All these jobs had a certain degree of risk of injury and/or death.

Now, I spend my working day staring at a computer screen, with the greatest physical harm I'm likely to encounter being hurt eyes from staring at my screen too long. Americans generally are less likely to be employed in manufacturing jobs and more likely to be in the service sector. I don't know that I necessarily regret this, because I'm a wimp and I don't think I would do well on the frontier or walking the Oregon trail.

However, one "hands-on" thing that I love to do is bake. It's true that you can buy a cake at the store and it tastes delicious, but there's something about cracking open the eggs and mixing it up that makes it more enjoyable. I love to try baking new things. Sometimes this works well and other times it can be disastrous. This weekend I baked, and wanted to share pictures and a few recipes with you!

Banana bread (for some reason this loaf looked horrible, but I promise it tasted delicious): 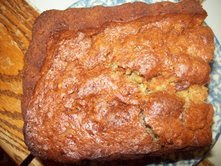 My favorite banana bread recipe is on the Diana's Kitchen website (and no, I'm not affiliated with the site, but it does have some good recipes). I like it without the nuts, tho. Some tips for good banana bread: bake at 325 degrees to increase moistness and DON'T put too much flour in! 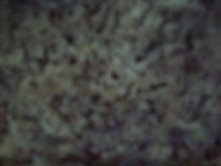 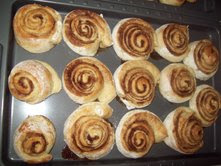 I'll have to do a separate post sometime on how much I love bread baking.

and, Coconut Cake for a church luau: 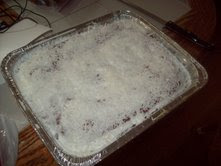 This recipe was really good, I may have to add it to my favorites!


And speaking of "hands on," I wondered why my cream in #4 did not form soft peaks, but instead was watery. I learned today that I had made a grave tactical error in whipping my cream - I had used a hand whisk, but you need to use an electric mixer to get real homemade whipped cream. My parents laughed at me, because no one knows how to make whipped cream any more! Lesson learned.

The only part of baking I don't love: clean-up. 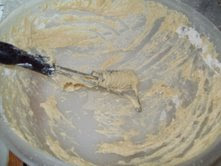