Let's start with what you already know about me: I'm a political nerd, feminist, and Mormon. All of these things motivated me to host a party in March with a theme of Women's History. Because I'm a political nerd, it focused on the struggle for women's suffrage. Because I'm a feminist, it focused on the women who fought for this right. Because I'm a Mormon, it had a food theme and cheesy decorations. Not wanting you, my online friends, to be left out of the fun, I decided to blog about it, so that you could host your very own suffrage party, should you desire to!

Any good party should have good food, and we had that in abundance. Our food theme was green, purple, and white.  Why, you ask?  Good question! These colors were some of the colors associated with women's suffrage. Green symbolized hope, purple represented dignity, and white stood for purity. So, we had cabbage salad (with purple and green/white cabbage), spinach and artichoke dip, smashed avocado, cucumber rolls with white cheese, peanut butter pie (dyed green and purple, of course), green jello with a white something and blackberries (it tasted much better than my description), and blackberry smoothies. My contribution was a cake which recreated a pennant on Wikipedia: 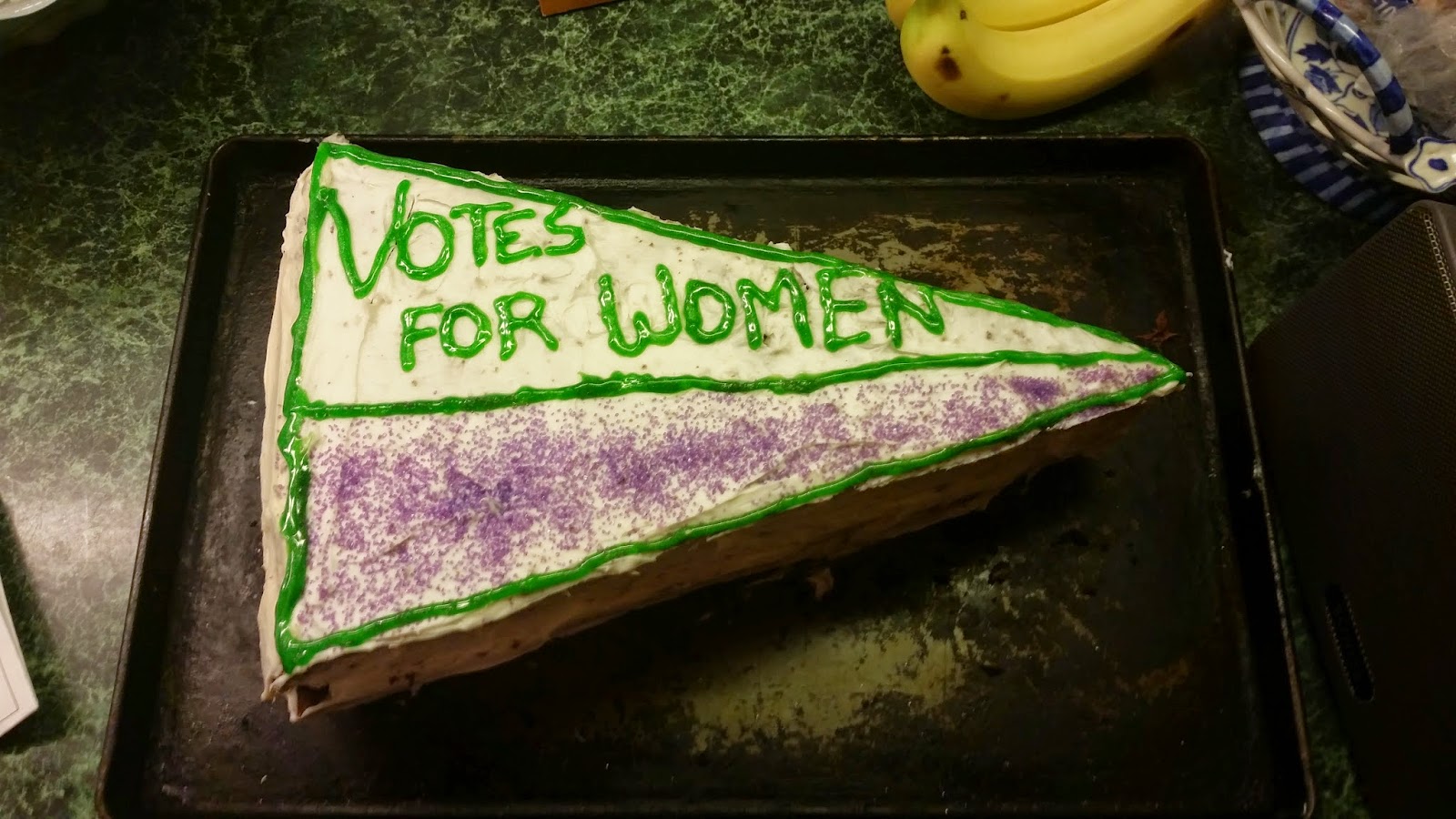 Next, decorations. These were not as pretty as I would have liked, but I ran out of time to make them beautiful so they were merely printouts and some black and white decorations done on butcher paper with a sharpie marker. We had an opportunity to take a "Suffrage Selfie" as you came in the front door: 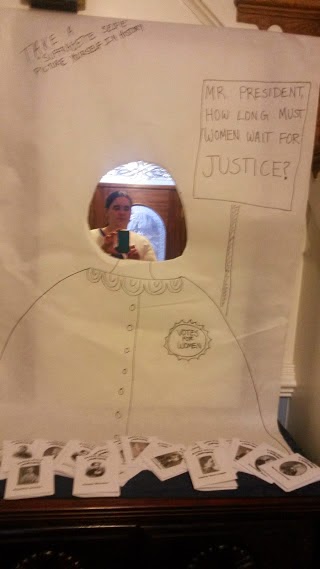 Also at the front door were short booklets I made which celebrated the life of women suffragists of all different stripes, so that everyone could learn about an amazing American woman. 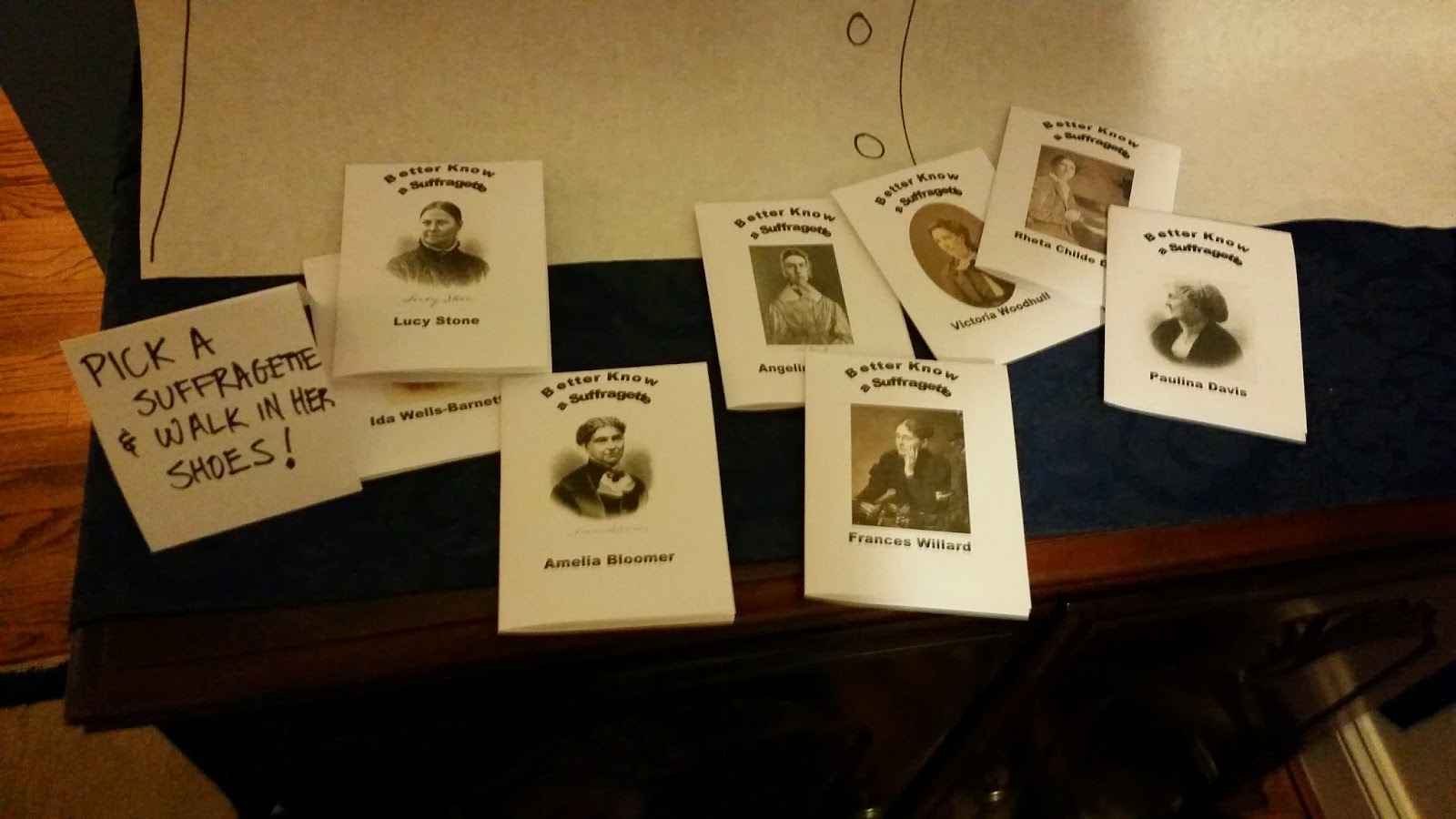 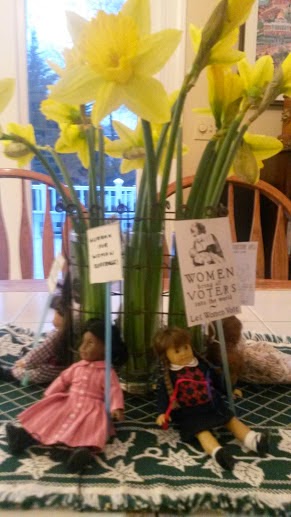 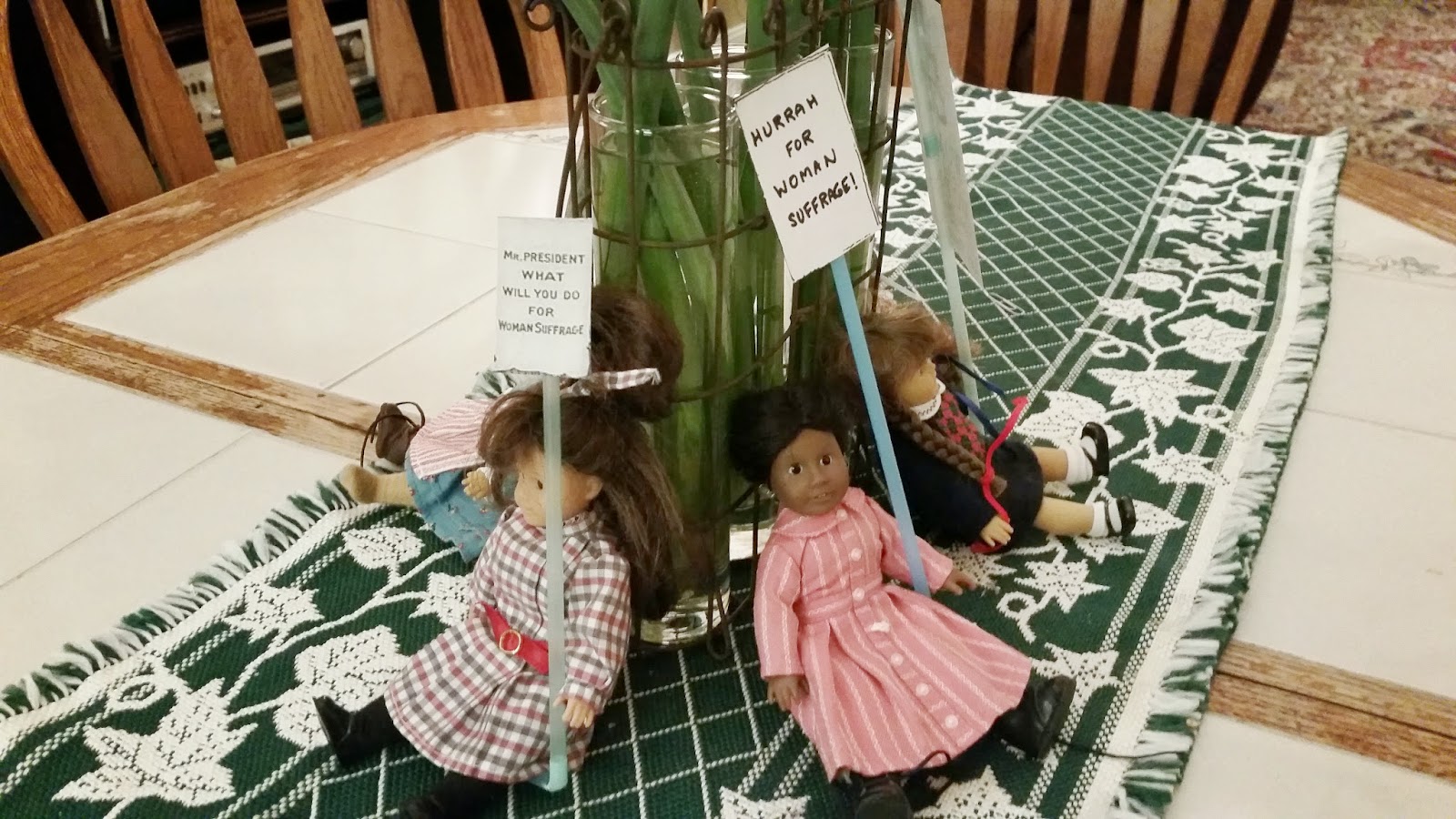 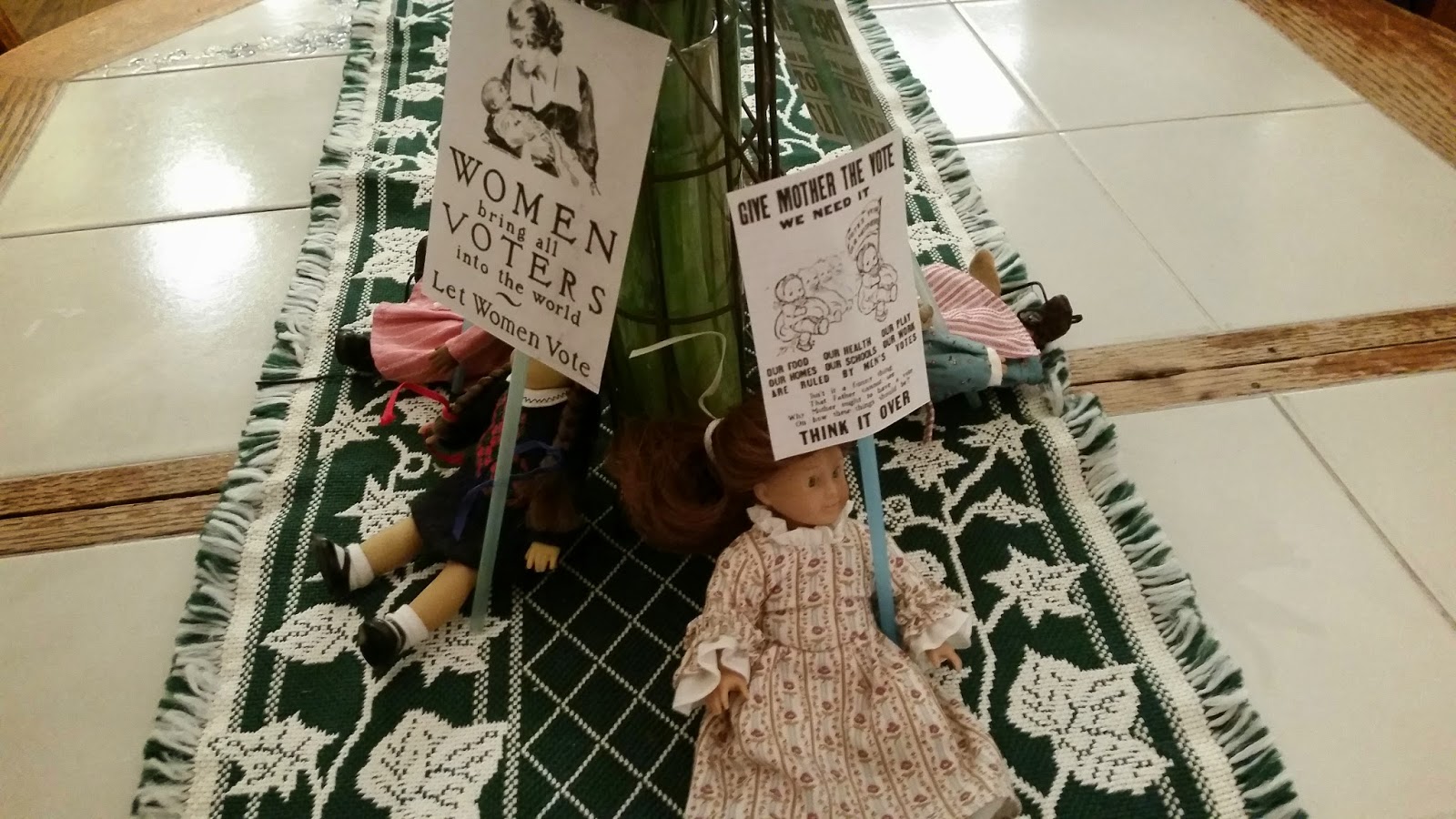 We also had a wall showing "pro" and "con" documents/pictures from the early 1900's. Naturally, my favorite argument against women's suffrage was that it would lead to higher taxes. 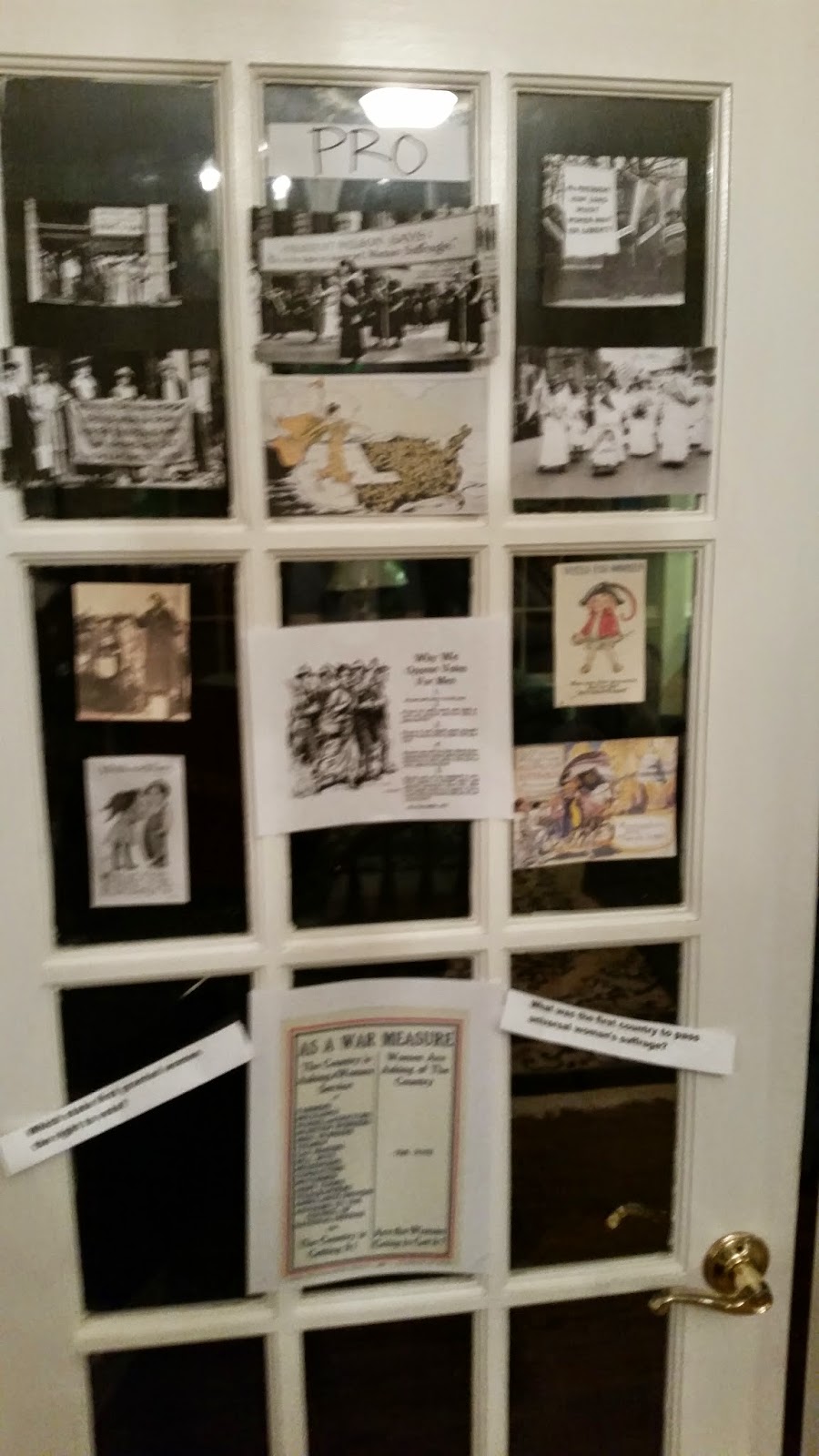 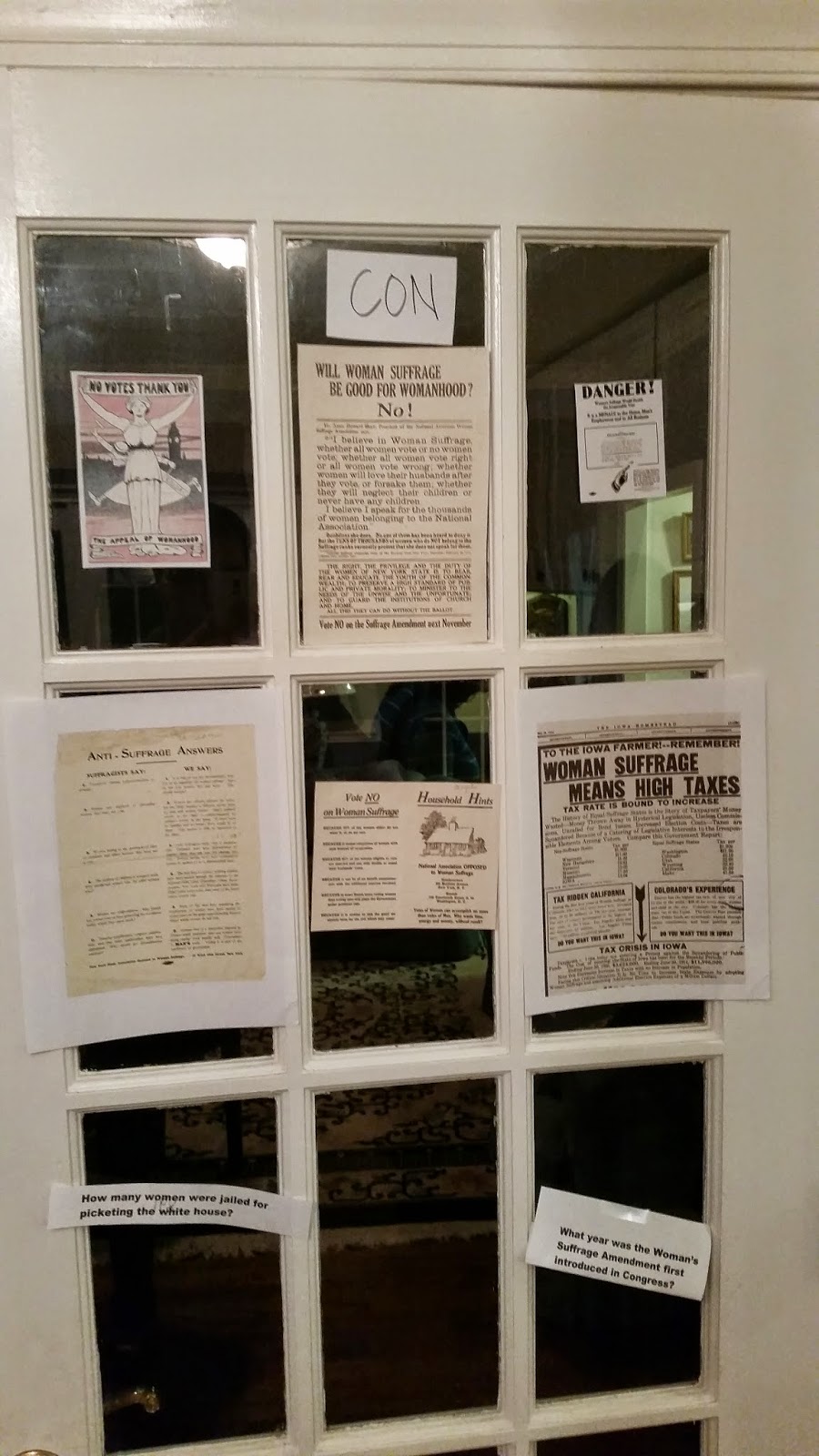 There was also a large banner, recreating one of the banners that the Silent Sentinels held while picketing the White House during World War I. 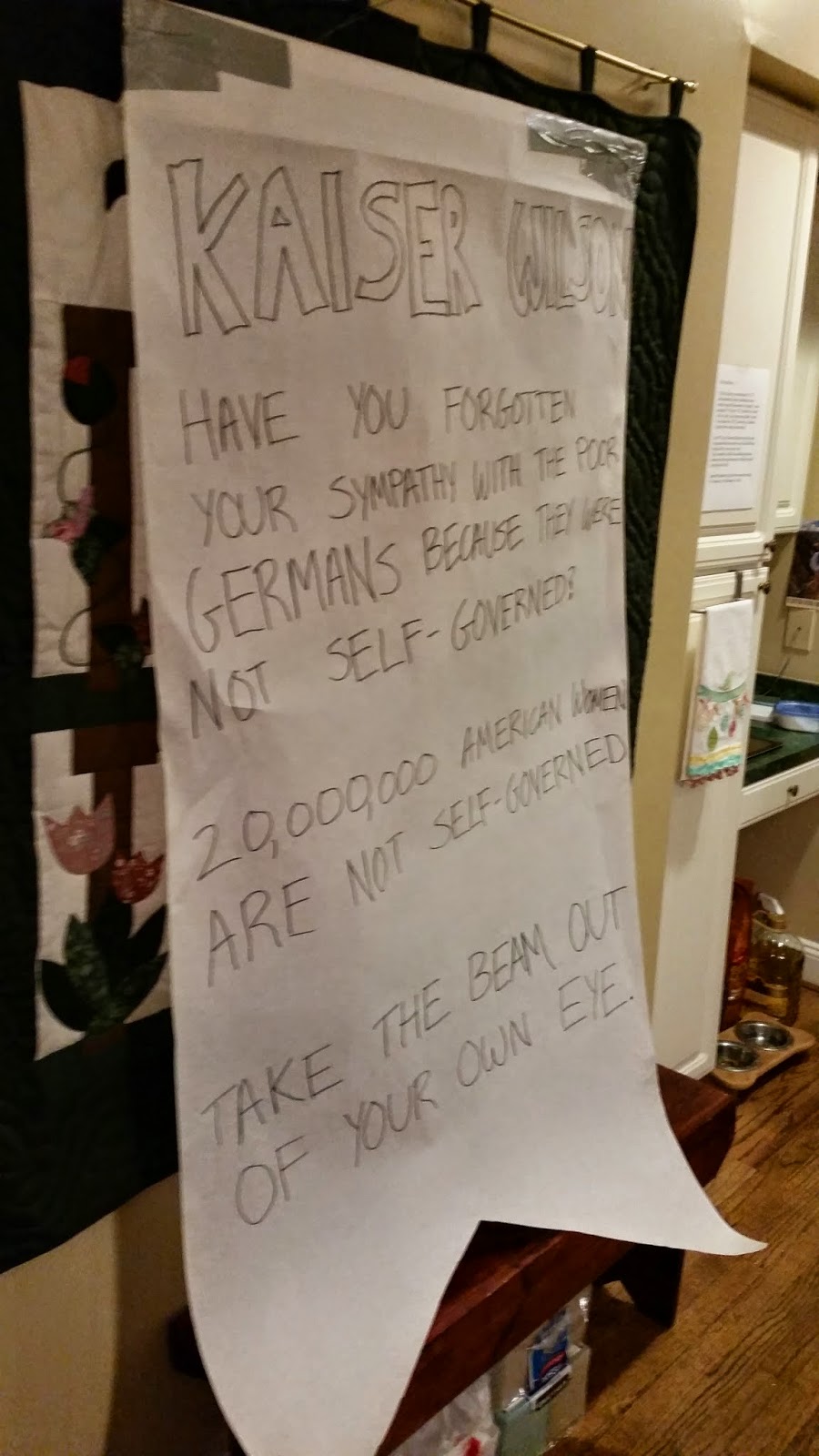 The main event, however, was watching the movie "Iron Jawed Angels," which follows the stories of Alice Paul and Lucy Burns, two of the radicals who founded the National Women's Party, picketed the White House, and were eventually thrown in jail, where they staged a hunger strike. It's an intense and fascinating movie, and if you haven't seen it, I highly recommend viewing and/or purchasing it. While it's not rated, there's probably a few moments which are PG-13 in content, FYI.

For the week before the party, I spent time reading about women's suffrage and the women's rights movement of the late 1800's and early 1900's. I learned so much about courageous women who stood up and spoke for what they thought was right. These women are heroines and examples to me. One of the books I read noted that all too often, history books say that "women were granted the right to vote" - a passive sentence that diminishes the decades of struggle and thousands of women who devoted countless hours to the cause. I encourage you to learn more about them and their struggle for ALL OF US. Too often, women's history is forgotten or dismissed, but these women made our country and world a better place. It's up to us to remember them!

Some more resources for planning your Suffrage Party (let's get #SuffrageSelfie trending on twitter, eh?):
Smithsonian Folkways Album Songs of the Suffragettes (Recorded by Elizabeth Knight)
Monica Grabin's Album HerStory - American Women in Song
Wikipedia page about Women's Suffrage in the United States
I've posted the handouts I used here, along with the decorations here (note: copyright violations and factual inaccuracies are possible)
Your Local Library! (if it isn't chock full of books about Suffragettes, stage a protest)
Someone has helpfully uploaded the entire PBS Documentary One Woman One Vote to YouTube:

If you do host a suffrage party, post about your experience in the comments!  Or, feel free to link to stories about women who inspire you.

March is a great month, and not just because it moves us closer to my release from busy-ness on April 15th. March is chock full of women-y things that make my feminist heart rejoice.  In the U.S., March is Women's History Month, where we remember the contributions of women in shaping America. March 8 is International Women's Day, which I first celebrated on my mission, and I love because it reminds me of all the strong, capable, spiritual women I met in Russia. March 17th brings the anniversary of the founding of the Relief Society, an organization I love and believe has so much potential to influence lives for good. And this year, the LDS church is holding its annual Women's meeting on March 28th.

The first Relief Society President, Emma Hale Smith, stated that "The object of the Society … is to seek out and relieve the distressed—that each member should be ambitious to do good." I really like that - I think that all of us can be "ambitious to do good." In celebration of all that is wonderful about women, I wanted to get the voices of more LDS women on Pinterest. Pinterest is full of inspiring quotes by male LDS leaders, but when I search for quotes by LDS women I often come up empty. So, to rectify that, I've created "pinnable" images for quotes from every general president of the Relief Society over the last 173 years - there have been 16 presidents so far.

Pin away, I say! Also, feel free to add your own favorite quotes from our Relief Society leaders in the comments below, or use Recitethis.com to create your own pinnable images.