I had my first fondant experience today. For those of you who don't know what fondant is, basically it is a type of frosting used by cake decorators on wedding cakes and other highly decorated cakes. Fondant can be rolled out and shaped and manipulated into all kinds of different stuff. The downside is that fondant tastes terrible (which is why you'll want real frosting in between the layers of your cake). For my friend's birthday party on Saturday night, I was assigned to bring the cake, and since I had Friday off I decided to make it a good one. The theme was books and chocolate. Can you guess what shape my cake was in? 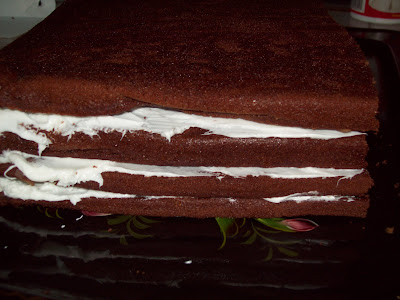 Then I cut out fondant for the outside of the cake, this involved a rolling pin, rulers, and a pizza cutter: 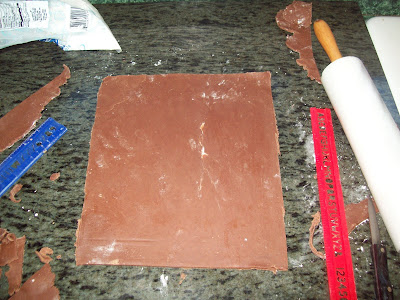 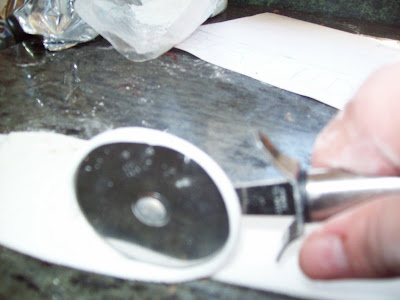 To make it clear that this was a birthday cake, you need a message, obviously: 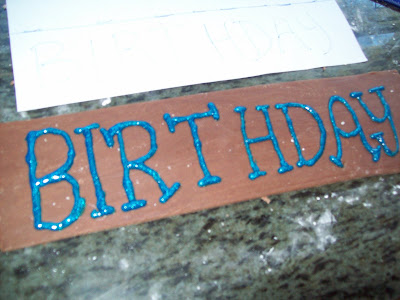 Overall, it turned out pretty well, hopefully you can guess what it's supposed to look like? 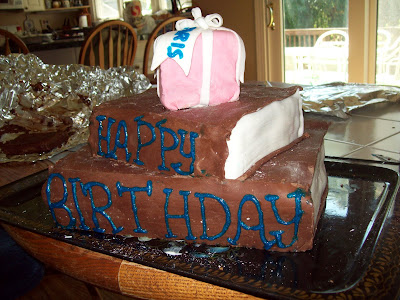 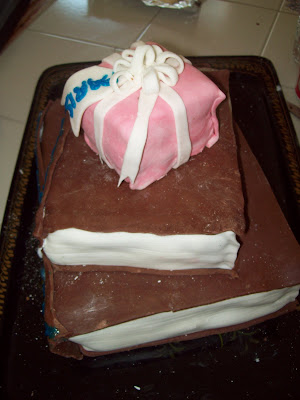 While I like trying new things, this was definitely an exhausting exercise - perhaps not to be repeated.
Posted by Diana at 11:59 PM 2 comments:

Email ThisBlogThis!Share to TwitterShare to FacebookShare to Pinterest
Labels: I'd Rather Be Reading, Shake n' Bake

Frankly I've found most of the "Ground Zero Mosque" controversy a bit baffling (as almost everything is, which in any way involves Sarah Palin). The mosque is not being built ON Ground Zero, or even within view of it. Another mosque has been near the site since the 70's. While some of those involved are undoubtedly good-hearted, others (mostly politicians) are using it to drum up hatred and anger.

I believe that at the heart of the controversy lies a fundamental misconception. All of the opposition somehow equates those Muslims who are building the mosque with the Muslims who perverted Islam and flew planes into the world trade center, murdering thousands of innocent people. This to me seems as incoherent as it would be to hold me responsible for the acts of some crazy extremist who happens to be Mormon. Why should we punish those who are not responsible for the attacks by restricting their free exercise of religion? Some would argue that Islam is inherently violent and preaches death to unbelievers, however, as an excellent article by Robert Wright in the New York Times points out, similar passages exist in the bible. I think that even the people who are sincerely opposed to the Mosque for non-political reasons are falling prey to this logical fallacy of equating Muslim extremists with all Muslims.

As Mormons, "We claim the privilege of worshiping Almighty God according to the dictates of our own conscience, and allow all men the same privilege, let them worship how, where, or what they may." This is part of the Articles of Faith, succinct statements of our fundamental beliefs. It specificially says that we believe all mankind should be able to worship God WHEREVER they desire to. Shouldn't this include a location in New York City of Muslims' own choosing? Why should loud angry people decide where others practice their religion? Isn't that the beginning of tyranny?

Also, as a nicer way to oppose the Mosque, some have said that "Sure, they have the right to build the Mosque, but they aren't being "sensitive" to the emotions it creates." Well, leaving aside the fact that someone will always be offended by religious practice, this creates a world where we don't have true freedom of religion. Instead we have freedom of religion as long as the majority approves of your religion. Again, this goes back to the automatic assumption that all Muslims are terrorists. This is simply FALSE, and punishes the innocent for the sins of the truly guilty.

I thought this was an excellent post breaking down the logical fallacy behind opposing the Ground Zero Mosque: http://theboard.byu.edu/questions/59155/ (note: Sauron is not the LOTR Sauron, it's someone's pen name on the site)

So, I have zero opposition to the mosque in downtown NYC. I hope it is built and becomes a refuge of peace for those seeking to worship God.
Posted by Diana at 3:38 PM 2 comments:

Remember Remember the 15th of September!

For most of you, September 15th is just another day. However, if you are a tax accountant who works on corporate and/or partnership returns, September 15th is D-Day (only slightly less bloody). The 15th is the due date set by the magnanimous IRS for corporations and partnerships to file their annual returns. So in the days leading up to the Big Day, I had a countdown going on in my g-chat status, set to the tune of "12 Days of Christmas." Consider it my one burst of creativity during accounting busy season. I thought I would explain the various phrases, and hopefully put you all to sleep so you can have a nice nap.

12 Deductions drumming (deductions = expenses in tax-speak)
11 Pro-rata allocations piping (allocations are how income is assigned to partners in a partnership)
10 LLCs a-leaping (Limited Liability Companies, aka LLCs, are a way to organize a business)
9 Tax credits dancing (tax credits are applied against a corporation's tax liability to reduce it)
8 Exceptions a milking (All rules, especially tax rules, have exceptions. Then there are the exceptions to the exceptions! That's a tax accountant's bread and butter)
7 Sections skimming (Each part of the internal revenue code is called a "section" - for giggles, there is a part of each section described as "flush language.")
6 Returns e-filing (Many large corporations are required to file their tax returns electronically, thus saving the planet - see #1)
5 Golden refunds (Corporations are required to pay estimated tax throughout the year - most choose to overpay because you're never sure what you tax liability will work out to, thus leaving you with a refund at the end of the year)
4 Calling conferences (Conference calls, the bane of my existence)
3 Faulty pens (Somehow, whenever I reach for a pen, it is dead)
2 Snail mails (Returns do not actually have to arrive at the IRS office by the 15th, they just have to be postmarked by the 15th)
And 1 ream of paper from a tree (this is how much paper it takes to print returns. I was working on a "simple" Federal return, which ended up weighing in at 75 pages including statements. Not to mention state returns!)

After the countdown, it's time for the end of busy season party and post-deadline lull, in which little work occurs!
Posted by Diana at 3:07 PM No comments: