This month I actually finished TWO books, but I'll only share one of them here.  I just finished a book about Jane Austen written by a single evangelical Christian woman, it was an interesting perspective on Austen, and on life.  The book is "A Walk With Jane Austen" by Lori Smith.  It's an autobiographical account of a woman's travel through the places Jane Austen lived and walked.

The author perfectly expresses some of the same angst that Mormon single women sometimes experience when they get older and are still unmarried.  Plus, I just love Jane Austen, and I'm going to England in May, so it was a fun book to read to see where I should visit to walk in Jane's shoes.  One of my favorite parts was a prayer that she quotes which Jane Austen herself wrote:

Look with Mercy on the Sins we have this day committed, and in Mercy make us feel them deeply, that our Repentance may be sincere, & our resolutions stedfast of endeavouring against the commission of such in future. Teach us to understand the sinfulness of our own Hearts, and bring to our knowledge every fault of Temper and every evil Habit in which we have indulged to the discomfort of our fellow-creatures, and the danger of our own Souls. May we now, and on each return of night, consider how the past day has been spent by us, what have been our prevailing Thoughts, Words, and Actions during it, and how far we can acquit ourselves of Evil. Have we thought irreverently of Thee, have wedisobeyed Thy commandments, have we neglected any known duty, or willingly given pain to any human being? Incline us to ask our Hearts these questions Oh! God, and save us from deceiving ourselves by Pride or Vanity.

If you've ever read any Jane Austen, you know that she was very good at pointing out the pride and vanity in the world, and gently chiding us for it.  I thought this was a beautifully composed prayer that really expresses the meaning of daily repentance and self-evaluation.

My goal for March is another two books: both about the heritage of American women, one by a liberal columnist and the other by a conservative Senator!  Happy Women's History Month!

(You can read the full prayer and one other one here: http://acacia.pair.com/Acacia.Vignettes/Two.Evening.Prayers.html)
Posted by Diana at 10:49 PM No comments:

Email ThisBlogThis!Share to TwitterShare to FacebookShare to Pinterest
Labels: All The Single Ladies, Femme Fatale Feminist, I'd Rather Be Reading

You may not know it, but I DO have a valentine's sweetheart.  Let me tell you about my special valentine:

You may have guessed, my valentine is Microsoft Excel.  Yes, the computer program.  As an accountant, I think it's going to be a long term relationship.
Posted by Diana at 7:07 PM No comments:

Email ThisBlogThis!Share to TwitterShare to FacebookShare to Pinterest
Labels: All The Single Ladies, Riding Nerdy

Here's my message of the day - find Joy.  I love the word JOY because it implies more than transitory happiness or contentment.  It implies that you have found something you treasure and hold dear.  Find the joy that lasts. 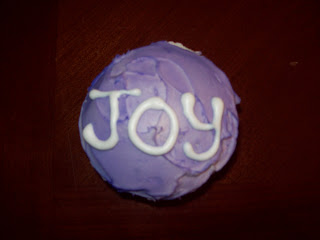 For me, baking is joy.  Here are some cupcakes I baked today for a friend's birthday.  Purple ones are chocolate, light pink ones are strawberry, and dark pink ones are red velvet. 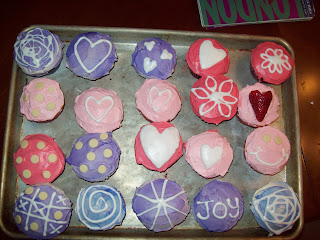 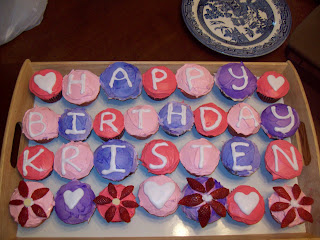 Poopyheads.  There, I said it.  They are behaving like THIRD-GRADERS.  No, actually, that's too nuanced.  Republicans are behaving like small children in a restaurant throwing a temper tantrum because they can't order dessert.  Even third graders know better.

First, the name of their first bill? "Repeal the Job-killing health care act."  It's not job-killing.  Also, you are naming something in so incendiary a manner that even those who may agree with some of your points are amazed at your colossal lack of respect for people who have genuine disagreement with you.  You betray your childishness by naming something that way.

Second on Republican's agenda, I find the "Stop Taxpayer Funding for Abortions Act" offensive.  The idea of this bill is to stop taxpayer funding for abortions IN SOME RAPE CASES.  Thus saying that rape of a mentally incapacitated or drunk woman, for example, is somehow less of a rape.  That is just wrong, and offensive to me and all women everywhere.  That has moved beyond childishness to being a colossal jerk to women who are in an incredibly difficult situation (and you, as a heavy handed government interloper, would presume to make their personal decisions for them).

So, Republicans, enjoy your poopyheadedness.  I hope it leads to your downfall in the 2012 elections when the American people realize you haven't done anything except call people names and prey on society's most vulnerable.

P.S. I'm not saying Democrats can't be petty and petulant too (goodness knows they are masters of it), but I think Republicans are turning it into an art form.
Posted by Diana at 9:49 PM 2 comments: