Today I was overwhelmed by having to choose toilet paper at Target.  Yeah, that was a pretty sad moment. I was trying to figure out which was the cheapest option - 24 "double rolls" or 12 "mega rolls."  And I just stood there for a while...  I'm pretty sure the guy restocking the shelves thought I was insane as I stared at the Charmin while muttering to myself.  So, on this President's day, this was just the pep talk I needed:


A Pep Talk From Kid President to You
Posted by Diana at 10:24 PM No comments:


Because I’m such an expert on love, I’ve written about my undying love for my favorite sentient computer program, and how grateful I am for the love of friends.  But when it comes to romantic life, this old newspaper comic pretty much sums up the dating scene for me:

I have nothing against love, let me make that clear.  I am not the bitter feminist strawman (strawwoman?) who hates men or doesn’t want to get married.  True story: I do want to get married, if I can find a man both foolish enough to be bamboozled into wanting to marry me and yet not daft enough to drive me insane.  I really do want that, and would love to be a mom to boot.  What I do NOT like is the implication that unmarried people (of any age) are losers, pathetic, or somehow “less than” married people.  I feel that this is too often portrayed in pop culture AND Mormon culture.  I know my marriage status does not make me a second class citizen, yet somehow Valentine’s Day sometimes makes me feel that way.

So, because of my confessed oversensitivity, I’ve been thinking about ways to avoid the whole day, fantasizing about doing the following:
-          Steering clear of Facebook for at least 48 hours, thus avoiding the inevitable “I love my husband/wife/girlfriend/boyfriend/fiancé/specialsomeone/dog/cat/turtle/chia pet sooooooooooooooooooooooooooooooo much!!!!” status updates
-          Avoiding grocery stores, flower shops, or any other place where chocolates, flowers, and greeting cards are sold for the week leading up to V-Day
-          Calling in sick and ignoring the world on February 14th

On Valentine’s Day, sometimes the path of least resistance is to feel alone, inadequate, or unloved.  So this Valentine’s Day I thought I would throw down a challenge for all you Single Ladies and Gents, to help you survive “Singles Awareness Day.”  It’s inspired by three things:
1)      This, which I found outside my door this morning:  (Thank you to whoever left the beautiful roses!) 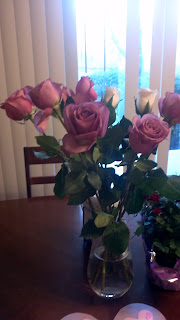 2)      An article in the Washington Post recently about a cancer survivor asking people to do miracles for him, and
3)      Spencer W. Kimball’s quote about how God works in our lives: “God does notice us, and he watches over us. But it is usually through another person that he meets our needs.”

My Challenge is this: Be someone else’s miracle today.  Do something super nice for somebody else, just because you can.  Wash your roommate’s car.  Help out a co-worker with a hard task.  Take someone to dinner.  Call up a long lost friend just to say hello.  Roll down your window and give more than you usually would to a homeless man.  Befriend a stranger (within reason, and don’t accept their candy).  Mend a relationship that is broken.  Give a genuine and well-thought-out compliment.  Show love instead of judgment when someone is struggling with a problem that you find easy.  In the spirit of this blog, find some common ground with a political opponent.

I was struck in reading M. Russell Ballard’s recent talk with this quote:
There is one simple daily practice that can make a difference for every member of the Church.... That simple practice is: In your morning prayer each new day, ask Heavenly Father to guide you to recognize an opportunity to serve one of His precious children. Then go throughout the day with your heart full of faith and love, looking for someone to help.

Yes, it is quintessential Valentine’s Day Cheesiness. Yes, it will not solve the problem of being outside a romantic relationship on the one day of the year when the world around you is awash in romantic love.  BUT it hopefully lightens the load a little bit and helps you not focus on yourself.  The world is not out to get you, and other people are not in relationships just to rub in the fact that you are single.  Be happy, be (emotionally) healthy, long life!  Happy Valentine’s Day, everyone!

If I had to bet on the most prevalent reason that Mormons are Republicans instead of Democrats, my wager could be summed up in one word: Abortion.  It's a lightening rod, black and white issue for most Mormons.  On this matter, Mormons may think that Democrats are the evil party of "abortions on demand," while Republicans virtuously defend the rights of the unborn.  Some Democrats, on the other hand, vilify those who are pro-life as forcing women to endure the psychological torture of carrying a baby which is the product of rape or incest. 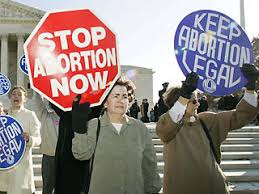 For that reason, I've never done a post on abortion before. The extremists on both sides are wrong in many ways.   My brothers have a tried and true rhetorical technique which I'm going to use in this situation.  If someone asks me "Are you pro-life or pro-choice?"  I will respond with "yes."  The black and white categories don't adequately capture my views.  I am both and neither at the same time.

I am pro-life because I believe that we should value life, and the unborn should have advocates because they cannot speak for themselves.  I am pro-choice because I don't think the government should invade my body, or the body of any woman, like that.  And yes, I am not pro-life because I believe that a cluster of cells is different than a human being (I acknowledge this leaves me vulnerable to slippery slope arguments).  I am not pro-choice because I think that abortion should be regulated and restricted in some ways.

My 8th grade science teacher (who tried, bless him, to make health class for teenagers less awkward), had some wise words that I'm hoping we can all get behind.  Speaking about abortion, he said "the one thing both sides can agree on is that there should be fewer abortions."  Basically this captures my position.  Abortion should be legal, and rare.  We should create a world where women don't feel they have to get an abortion, but if they do, it should be done safely instead of in a back alley by a black market doctor.

Ironically enough, it's the position of 1994 Mitt Romney.  Then-candidate Romney discussed how someone he knew had died from an illegal botched abortion in the 1960's before Roe v. Wade.  More recently, Savita Halappanavar, a woman who was allegedly denied an abortion under Ireland's very strict anti-abortion laws, may have died as a result (the case is still being investigated).  The Mormon church's statement is that abortion is only allowed in cases of rape, incest, when the mother's life is at stake, or when the baby has severe mental defects which would not allow it to live beyond birth.  That is my own personal position, but...I still think abortion should be legal in this country.

Suppose in 2016 that Marco Rubio, Rand Paul, or another pro-life Republican is elected and manages to stack the Supreme Court with pro-life judges.  Suppose further that in a few years after that, the court gets an abortion case and overturns Roe v. Wade so that abortion is illegal again in this country.  To me, the result of this would be that rich women go to other countries and get abortions anyway, and poor women die as a result of illegal abortions.  This does not actually reduce the number of abortions, but just compounds the misery by resulting in needless deaths of women.  What will reduce the number of abortions?  This is the subject of another post.  For now, I am both and neither in the abortion debate.  I want a better and less extreme position.

I encourage you to read *both* pieces no matter where you have a position on abortion.  They are both thoughtful explanations of a topic that for too long has been reduced to shouted slogans and nasty exchanges.
Posted by Diana at 10:17 PM 1 comment:

Why Are We Changing Maps?

One of the funniest moments in West Wing TV.  I love this clip.

Article of My Faith

A dear friend of mine, M., got married today!  I was so happy for her and delighted to attend her wedding.  It was inside a Mormon temple, and if you've never been to a ceremony, it's beautiful, simple, and (best of all?) short.  We Mormons believe that marriage in the temple is a "sealing" which lasts after death.  In other words, we get to be with our families eternally.  Generally I hold the temple sacred so I'm not going to share with you the exact wording of the sealing ceremony, but I love the promises that are extended to the happy couple, which includes the promise of a Heavenly hereafter.

Today's wedding reminded me that God has so much more in store for us than we could ever imagine.  His promised blessings and assurances are so grand that some people think they offer false hope.  But an article of MY faith is that God's promises are sure, and surpassing all human understanding.  It reminds me of a remark by one of my church teachers about Doctrine and Covenants Section 137, which is a vision Joseph Smith had of heaven.  In verse 4, it says that Joseph beheld the streets and they were paved with gold.  My teacher remarked that Joseph was so overawed by the grandeur he beheld in seeing Heaven that all he could manage to describe were the streets of gold - imagine how transcendent the rest of Heaven is!

I know not everyone believes in Heaven, but I do.  I see a little, tiny bit of it when I enter the temple.  But I believe that God has even more in store for me, for you, and for each of his children than any of us could ever realize.  And that's my faith.

Now, on to the wedding reception - you'll just have to have faith that these mint brownies turned out okay!!! 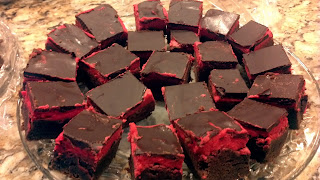