One childhood memory I have is being caught reading multiple times on the same night AFTER lights out. I don't remember what I was reading, but I do remember the secret thrill of re-opening the book, getting out a flashlight, and trying to squeeze out a few more minutes of reading. Adults often say that they don't have time for reading, which is true for me too, but every once in a while, a book comes along and sucks me in - when that happens, I usually have a compulsion to finish the book. At that point, all I can do is enjoy the ride and be grateful for great books.

That happened to me this weekend, when, amidst other things that I *should* have been doing, instead I read all 330 pages of "The Woman's Hour" by Elaine Weiss in less than 24 hours. It's a book about the battle to ratify the 19th Amendment in Tennessee in 1920. Remember, the 19th amendment is the one that "gave" women the vote. That passive phrasing belies the thousands of hours and hundreds of campaigns that women waged in order to get their rights. 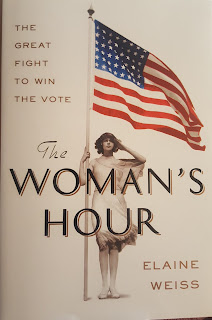 Most Americans may learn a little bit about the suffrage movement during their high school American history course. They may learn about Susan B. Anthony and even Elizabeth Cady Stanton. But beyond that, we typically don't spend a lot of time discussing the suffrage movement. This book brings alive the characters and forces that shaped this moment in time. It's a gripping story with a lot of twists and turns - even though I knew the outcome, it kept me engaged right til the bitter end! It talked about the grand strategies and plans, but also had a lot of great details (Get Women the Vote was translated into the colors Green, White, and Violet). 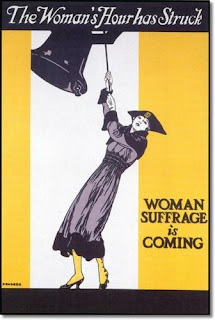 Instead of another Transformers/Avengers/Fast & Furious movie, I started thinking about the fact that this book HAS TO BE MADE INTO A MOVIE. Or even a Netflix multi-episode series. Once I started thinking about that, I started to cast the movie/mini-series in my head. So, without further ado, here is my casting dream team for "The Woman's Hour" movie - if we start filming now, we can get it released during the 100th anniversary of the 19th Amendment's ratification in 2020!

At the beginning of the story, three women are boarding trains - all headed to Nashville to fight their chosen battle, as Tennessee could be the 36th state to ratify the 19th Amendment, thus enacting the amendment.

First up, Carrie Chapman Catt, head of the National American Women's Suffrage Association (NAWSA). This is a role that Meryl Streep was born to play, and she MUST DO IT.
Our second train passenger is Sue White, a militant suffragette who was part of Alice Paul's radical "Women's Party" and was also a native of Tennessee. For this role, I'm casting Brie Larson - she's got to be tough and smart.
The third train passenger is Josephine Pearson, head of the Anti-suffrage movement in Tennessee. It may shock you to know that there were many women who were against suffrage, but it's true. One of them was Josephine Pearson, an educator from southern Tennessee, who led the charge in 1920, and was *almost* successful. In my mind, Kathy Lee Bates would play this role with gusto and empathy to Pearson's concerns.
These three women converge for a multi-week battle during a hot summer in Tennessee. They are joined by loyal footsoldiers from the suffrage and anti-suffrage movements, including:

- Catherine Kenney, a Catholic redhead who headed the Tennessee Women Voters' ratification committee. I see Amy Adams in this role.
- Anne Dudley, a society woman and mother who made suffrage socially acceptable, to be played by Felicity Jones.
- Betty Gram, who left a Broadway career to become a suffragette (and confronted and publicly shamed politicians who double crossed the movement). Jennifer Laurence can portray her.
- Juno Frankie Pierce, an African American suffrage leader who addressed the first meeting of the Tennessee League of Women Voters in the statehouse. This role is for Octavia Spencer.
- Anita Pollitzer, a veteran political operative who combed the hills of Tennessee to find out politicians' stances and convince them to vote for suffrage. Carey Mulligan would do a good Anita, I think.
- Nina Pickard, President of the Southern Women's Rejection League. Reese Witherspoon is from Alabama, and Nina was too, so this is meant to be.
- Charlotte Rowe, a professional anti-suffrage speaker who spoke out across Tennessee. I would love to see Allison Janney play this role.

These women have to contend with double crossing politicians, wily presidential candidates, journalists eager for sensationalism, and the racist/sexists attitudes of the times. I really like how this book places the fight in the historical context, and draws out the issues swirling around these women. While it focuses on the 1920 fight in Tennessee, the book also lays out the history of the movement, going back to the Seneca Falls Women's Rights convention in 1848. I also like that, while the book obviously talks about the male politicians and journalists, it focuses squarely on the women, and their gumption and determination.

The last character I'll mention is Phoebe (Febb) Burn, who wrote a pivotal letter to her son, the youngest state legislator, urging him to "be a good boy and vote for suffrage." Febb was college educated, and ran the farm after her husband died, while raising her kids. (Spoiler alert) Her son, Harry Burn, the youngest state legislator, ended up casting a deciding vote in the Tennessee House for suffrage. My vote is for Helen Mirren to portray her in the movie. So, Netflix and Movie Studios - it's your move. Make this happen for me!!!!